The nature of time and how we perceive it has been a lifelong fascination of Gail. She is interested in the connections between quantum physics theories of time, dreamtime, and what Joseph Cornell refers to as “the Eterniday,” a timelessness within the passing of time.

In her most recent work, “Cinema Optique”, a miniature old-time movie theater showcases a series of new videos and collage films that reference attempts to corroborate and affirm our personal experiences and existence.

The theater installation provides a context in which characters that would otherwise be separated by time can act, invent, and explore their perceived roles and perfect their performances while sharing the same psychic space of light, space and projection.

She sees her work as visual metaphorical narratives, where the 3-dimensional characters are freeze-framed in a state of suspended animation while an event is continually unfolding, repeating and reconstructing itself.

Gail recently completed a piece for the SOHO20 Chelsea Gallery annual group show in New York City titled Cinema Optique.  The structure is based on a child’s “fold & go” puppet theater (so it’s easily portable).  She added additional wood and metal elements to the “theater” and had video streaming behind the stage on a hidden DVD player.

Gail is interested in taking these mini theater installations into communities in conjunction with stop motion animation workshops, have the participants decorate and embellish the “fold & go” puppet theater and leave the completed piece along with the resulting animations.  She has done this already with the Everson Museum of Art in Syracuse at their Summer Art Camp. The theme of the stop-motion animations will be up to the community. 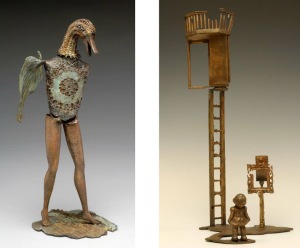