Mita is a contemporary visual artist currently living and working in London. The natural environment and our connection to it is an important aspect in her work. She is therefore really keen to carry out a residency at the Stiwdio Maelor, as it situated in a rural environment, away from the trappings of urban life and modern technology. Mita will be staying for eight weeks as she believes that to make work that is derived from nature she needs to allow the time to change pace and align daily life with a pace that respects those natural rythms.

Mita’s current work is exploring the lure of the high places on earth, asking why humans risk their lives to stand hundreds of thousands of feet on a rock in thin air, where the most simple act between life and death – that of taking breath, is a challenge. A residency period located in Corris, North Wales will give Mita a valuable chance to spend some time in the mountains of North Wales, where she hopes to further develop this work. 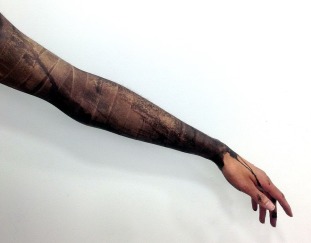 In October 2012 Mita embarked on what was to be the longest walk of her life – an 18 day trek in the Himalayas, from Lukla in Nepal to Everest Base Camp at over 17,000 feet in altitude. It was mentally and physically the most she had ever demanded of her body. In her project ‘Body of Work’, Mita used the concept of walking – taking a line for a walk – around the body, the resulting pieces of work are the impressions of these walks. The abstract compositions are a human cartography, where an abstracted whole is constructed by piecing together parts, using systems similar to those used in mapping the earth. Over the next 3 months she will be spending time walking along the Penine Way in order to make work for HIGHLINE – an exhibition at the South Square Gallery in Bradford celebrating 50 years of the Penine Way.

In her ongoing series of work ‘Art Histories’, Mita deals with obtaining ‘documents’ of a surface. The pieces are created using frottage, studying through the haptic sense the spaces that artists use. Each studio has its own texture, its own music. The resulting pieces are a visual recording of that music. Mita will make pieces for the series ‘Art Histories’ on site and donate a piece from this series to Stiwdio Maelor at the end of the residency. This series of work will also allow her to connect with other artists in the community. 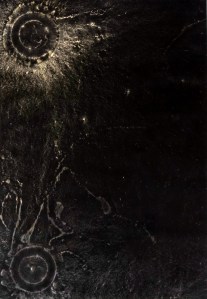 Mita will be running a workshop during her stay. She has been running workshops for community, adult and school groups through working at The Pumphouse Gallery in Battersea Park. She is also keen to attend Welsh classes during her stay, this will give her insights into Welsh culture and an opportunity to be more involved in the local community. Mita is bi-lingual in Gujerati and English, her parents were born in Gujarat in India and migrated to the UK before she was born. Language holds so much cultural understanding, so she feels it would be wonderful to be able to share some small part of that. 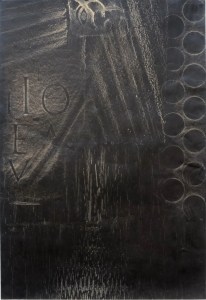