Vidmante’s work tends to focus on the details of her personal experience, stated time and a particular crucial one – domestic abuse. Vidmante’s work is at its most sincere, creative and productive when she is speaking from the bottom of her heart. Her intention is to transmit a message – a picture of the past using a poetic, delicate approach.  Her work addresses the fragility of relationships, domestic violence and fundamental threads of violence and danger that underline our society.

Vidmante finds that puppet performance and a video performance are one of the best methods for her to communicate with the audience.  Vidmante spent 10 years working in puppet theatre, which has influence her choice of medium. There she learnt how to operate various puppet techniques and also acquired knowledge of the transition of the character’s adventures, emotions and thoughts. Puppets turn out to be an art object itself (in reference Paul Klee), but also they can be brought into the theatre field. Vidmante uses puppets as a mediator between an audience and herself. She achieves freedom in the process of developing the puppetry as a creator and performer.

Her drawings are also based on the emotions, that moment’s emotions. The hand dictates the line and the emotions colours.

Vidmante’s Lithuanian background has an enormous impact on her development as an artist. The Lithuanian culture is considered especially melancholic and poetic. In her recent projects  she has tried to expand the poetic text and disclose the meaning through melancholic music. The poetic text, the songs and minimal action aim to move and catch the viewer.  Vidmante believe in our poetic beauty, that in every one of us there are hidden poetic treasures. 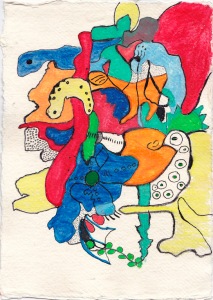