The Disappearing L… Women Only Night at Stiwdio Maelor

The stars of the Women only night…..

This June, Stiwdio Maelor hosted author, lesbian and women’s history professor Bonnie Morris. Bonnie has published 14 books with her latest Sappho’s Bar and Grill, a time travel novel to be released in June. In August 2016 Bonnie released a new book The Disappearing L: erasure of lesbian spaces and culture. The Disappearing L explores the rise and fall of the hugely popular women-only concerts, festivals, bookstores, and support spaces built in the era of woman-identified activism. Through the stories unfolding, anyone unfamiliar with the Michigan festival, Olivia Records, or the women’s bookstores once dotting the urban landscape will gain a better understanding of the era in which artists and activists first dared to celebrate lesbian lives. This book offers the backstory to the culture we are losing to mainstreaming and assimilation.

To celebrate Bonnie’s residency Maelor hosted a women’s only night with Bonnie. And what a successs it was!

There were readings by Bonnie, as well as Julie Burtinshaw and Elizabeth Jane Corbett, a performance by Ex-Sexcentenary and Associates in Wales, a mini exhibition by artist Betsy Jones, a talk by interdisciplinary artist Miranda Whall and artist films by women artists with music and dancing provided by DJ Gini. Plus we had a surprise performance on the night by cellist Claire Garabedian.

To start the evening there was a performance by Sexcentenary. Sexcentenary are a group of women, who identify as older, committed to the collaborative performance of gender, feminism and ageing. They have been performing since 2015. Recently due to changes in group membership Ex-Sexcentenary in Wales has formed. For the Women’s evening they performed Do you See Me? with associates from Wales. The performance started in the shop windows with over 20 women standing in the street. Slowly they came to life and came out of the building and walked towards the institute carrying stools. Dressed in conservative black skirts, white twin set and pearls they placed the stools in front of the Institute and did a bit of ‘man spreading’ with delightful views of the crotch of their stockings. After a bit of gossiping they picked up their stools and walked down to the river followed by thirty women. At the bridge in front of a No Parking sign they performed a play. At the end of the play they walked with their stools to the river and sailed four paper boats. Another walk back to Maelor followed by over 30 women. In Veronica’s studio exhaustion hit all four, so they huddled on the floor and had a sleep. 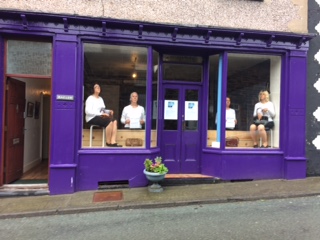 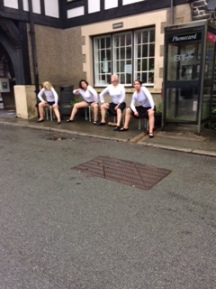 Front of the institute

They slowly woke up to Maelor’s surprise performer (even Veronica didn’t know this was going to happen) Claire Garabedian. Claire is a cello player from Hereford who has completed a PhD on music and dementia and for her performance she played familiar and unfamiliar pieces and talked to the audience about reactions to the music by people with dementia. 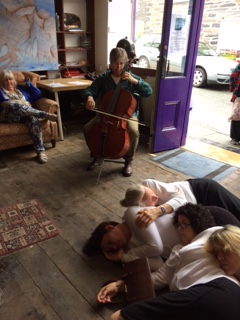 After this, we all took a break and enjoyed drinks, food and cake!

By 7pm, 45 of us women headed up to the attic to listen to talks by author Bonnie Morris, author Julie Burtinshaw, author Liz Corbett and artist Miranda Whall.

Bonnie really made us giggle with her funny anecdotes but also touching stories about herself as a baby dyke and the acceptance of lesbians in America and the beginning of the lesbian/women only music industry and festivals.

Canadian writer, Julie Burtinshaw, read a personal and very moving excerpt. Julie has completed two residencies at Maelor and is an award-winning author of six books, five of them novels for young adults, including The Darkness Between the Stars, The Perfect Cut, The Freedom of Jenny, Adrift, and Dead Reckoning. Julie’s latest book Saying Goodbye to London was released in March with some of it being written at Maelor during Julie’s first residency.

Elizabeth Jane Corbett read us a snippet from her first novel, Tides Between, which will be published by Odyssey Books in October 2017. Liz is an English born writer of Welsh descent who emigrated to Australia when she was five years old. She spent seven months at Maelor as a volunteer and came back to do a residency. In 2009, her short-story, Beyond the Blackout Curtain, won the Bristol Short Story Prize. Silent Night, was short listed for the Allan Marshall Short Story Award.

After the readings, Miranda Whall, interdisciplinary artist and lecturer at Aberystwyth University discussed the developments of her most recent film project Crossed Paths. Miranda says ‘This project is an exploration and development of my current interests in film, performance; the body in motion and mountain and upland ecology. I am attempting to experience and understand the mountain, its inhabitants and its matter, in relation to my body on the move. By filming from multiple cameras attached to my arms, ankles, head, back, stomach and legs and not my eyes, I access and offer an insight into what my body saw, of itself in relation to itself and the environment’

After such an enjoyable time in the attic we journeyed back downstairs for some dancing. And can we just say how amazing the music set was by DJ Gini Wade. We danced the night away! DJ Gini, was a founding member of the legendary Dr Funkenstein, the DJ collective who kick-started the underground party scene in mid-Wales. Since then she has played in many places, Wales, London, Bristol, Newcastle, France … mostly at festivals and free parties. Gini’s love of dance music started in the 60’s with the likes of James Brown, Stax & Motown and in the 70’s reggae and punk. These days she plays freestyle: mixing the latest funky dance tracks with soul, funk & reggae.

Canadian printmaker, Betsy Jones hosted an exhibition. Her work reflects the fragile aspects of the shrinking natural world in which we live. I loved watching her works on paper pegged onto a string of paper which fluttered as the wind came through the window.

Artist films were set up in Stiwdio Chwech. We had films by Karen Held, Jess Raby, Ana Rodriguez and Becca Byrne. The film roomed provided a quiet moment and a chance to see the latest films being produced by female artists in Wales.

Thanks to everyone who came on the night.

The next day ten of us also went for a lovely walk in the forest and a drink at the Tafarn Dwynant. Thanks to Kevin at the Dwynant for serving such a thirsty bunch of women. Nothing like a walk that starts at one pub (The Slaters Arms next to Maelor) and ends up at another!

Matilde Godero flew over from Spain for the event and interviewed Bonnie. This article from the interview was published in Pixara Magazine